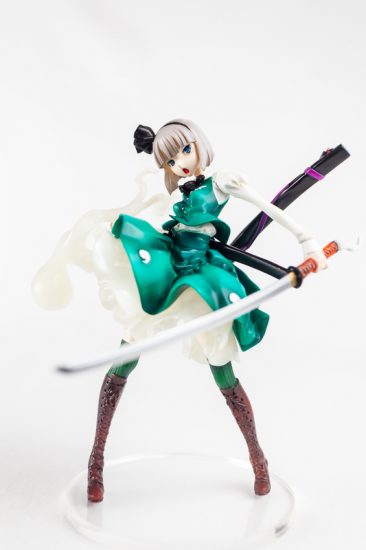 This is my second Youmu garage kit and second ReplyFrom kit. Colors always turn out a bit differently but I think the green came out really well. I’m sorry that Myon is barely visible due to the white background. Enjoy! 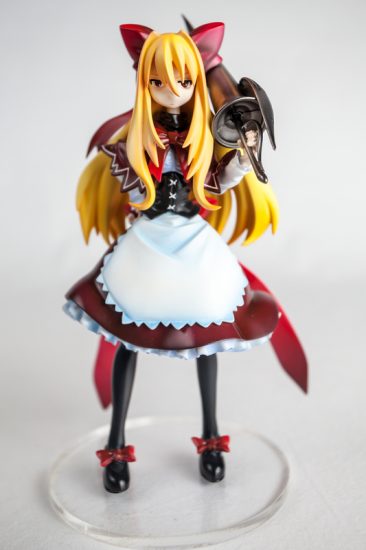 Hourai concludes the last batch of kits I managed to finish this year. All the prep work was done last year (except for Haruka, I think) so despite my lack of time for the hobby, I got something done, hurray! For those of you who are not that familiar with Touhou lore, Hourai is one of Alice’s dolls. I say that because she only has very subtle signs that she’s a doll in this figure. Her small hands show doll joints at the fingers but that’s about it. Speaking of hands, I first lost one of her hands and then “found” it again in pieces because I apparently stepped on it without noticing. I clumsily glued the pieces together and had to model part of it from scratch. Taking care of small parts is not my forte… but I now try to always put small parts into bags so they don’t get lost.

If it wasn’t for her massive hair, she would be able to stand on her feet alone. Since she’s technically a doll, I have no idea what her scale is. Maybe 1/3? I don’t have her with me right now but she stands about 12cm tall, I believe. Which means she’s pretty small. I enjoyed painting her a lot! 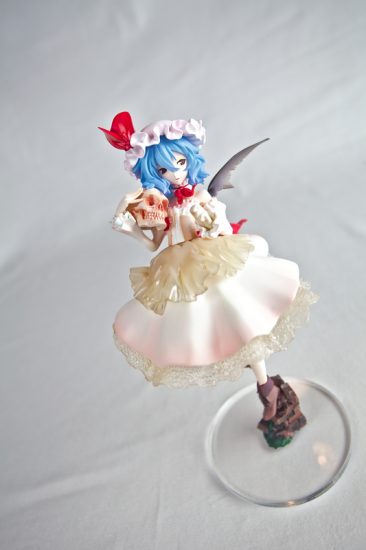 Aaand that concludes my kits from 2013. Yagyuu Toshiyuki is my favorite sculptor, hands down. His figures are somewhat small in scale but they still have sharp details and I adore the way he does frills and hair. Remilia here is a 1/10 scale at best. I’m glad he picked up Touhou and hope he will release more. Apart from Remilia, he’s done Youmu and Marisa so far. Go look at the reference pics of all of them, they are gorgeous. My version is a tad brighter than the original images but I think she still looks awesome. Painting her brick wall base was a new experience for me as I haven’t tried drybrushing before. There’s a lot of room for improvement but it’s okay for a first try. 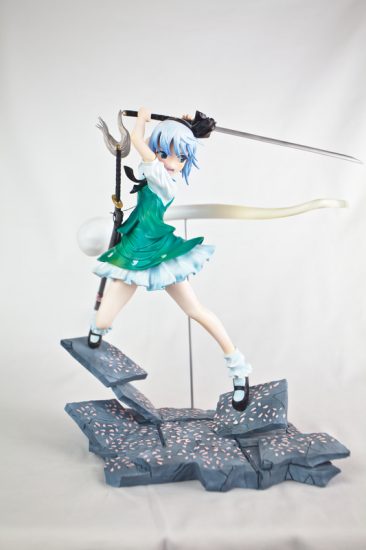 Another commission joins the gallery. Thanks to the patience of my commissioner, I was able to take my time with her. She looked so simple but gave me a lot of trouble because both cast and fitting were pretty bad. Even after I started painting, large gaps popped up and it took even longer. Yes, she’s not perfect (but then again no figure ever is) but I think she turned out decently enough. It doesn’t look like it but in fact she’s super huge. She alone can fill an entire Detolf department with not much space left.

Saigyouji Yuyuko! My pictures don’t do her justice. For once, I won’t complain about the lack of accessories of a Touhou Nendoroid, because Yuyuko comes with a lot of extras. But I know the next one (Cirno) will be somewhat of a letdown again. Can’t help it, I want them all nevertheless ^^;

Here’s some half-assed pictures of unpacking Youmu (still trying to figure out how to handle the camera and all). I was in hurry that day which didn’t help and I’m not very patient with blogging now (exam and paper deadline in a week! I’ve tried to push everything behind that date that could be delayed so workload is not gonna stop anytime soon). We actually have been trying out a lot of new things lately but we were mostly too lazy do document everything. Hopefully we can do that later sometime.

no images were found

It’s been a while since my last GK gallery post but the weather is improving and I can finally work outside which makes it all more enjoyable. So mayble I’ll actually get something done. This time it looks like I’m running out of kits, there’s one kit waiting to be finished and a few preordered (no idea when they’re going to be released). I’ve waited for Chen about a year too, E2046 has a wide range of kits but that also means you have to wait quite long for a kit which is not so popular.

Chen is an easy kit with few parts but mind you, building GKs is a lot of work nonetheless so I’ve spend a full week building her.

A more detailed WIP post will follow tomorrow although I don’t have as many photos as I’d like to have. I just happen to be too lazy when messing with tools and paint to wash my hands and fetch the camera.

Okay so I bought this straw hat last summer for a few Euros. I’ve always wanted one but it looks kind of plain….