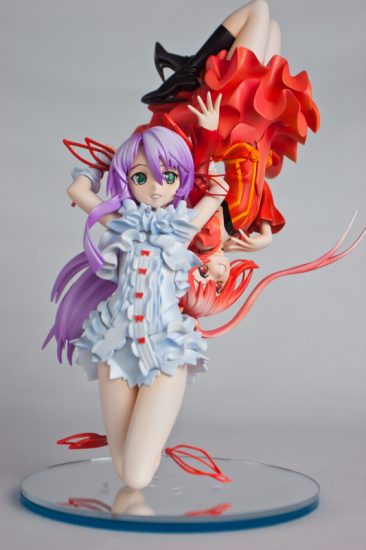 I believe this must be the most complex kit I’ve worked on yet. These two girls are really heavy chunks of resin given the scale (1/6). They’re only held together by a pin where their arms are interlocked (not glued) and I’m glad that it’s sufficient. I’ve taken many pictures from it’s progress so when I have time, I hope I can finish the GK building guide I’m working on.

There were many troubles with this kit and I’ve wrote the longest negative feedback at E2064. But now the kit’s done and all I can do is try better next time. I like the colors very much though, so enjoy the pictures! 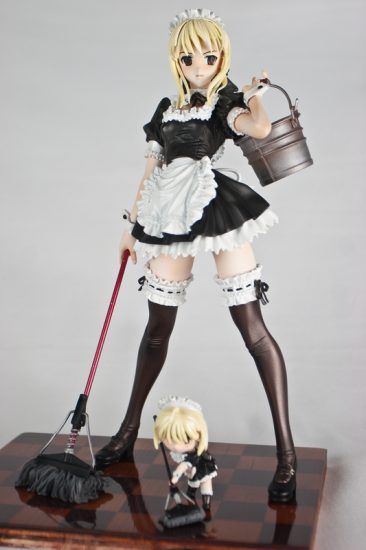 Apparently there are two releases from Kotobukiya, one is a painted resin kit and one is the PVC version. I am not quite sure how to classify this one here because I painted it myself. However, it’s safe to say that it’s a recast from E2046 (from the painted resin kit, probably). She’s still preorderable but I haven’t seen her actually being released for the last two years or so. I bought her from an user who got one from her earlier batches. This kit caused me a lot of headache because her skirt parts just didn’t want to fit together at all, among other things like thousands of micro-bubbles on her coat. I was also forced to remodel her glasses because I lost those that came with it. It doesn’t make a big difference though, the included ones were also just printed on plastic (and not laser etched metal). Despite all the difficulties, I think she came out nice (especially her base fits her so well!). More pictures under the cut! =w=