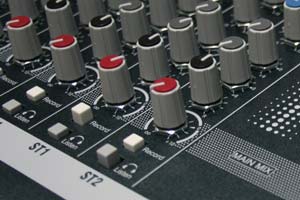 For your most basic setup – a 5.1 upmix, a52encode(!!) and spdif output pulse alone cannot get you to your goal. You need some small piece of alsa configuration so pulseaudio can properly autodetect your spdif output as well as leverage alsas encoder to do the actual work. On any debian-like system (and probably others too) you can just install a *RECENT* pulseaudio (>= 0.9.23) along with pavucontrol and put this piece of config into your

This does the following: It provides a configurable a52 encoder for a variable card to pulseaudio. It also sets the alsa-pcm-default to pulseaudio (which will make all your “legacy” alsa applications use pulse by default) as well as the control default to pulse.

Please note that with this and pulse’ default setup the first application that’ll do audio after boot will start your pulseaudio-server – and the owner of that application will own the pulseaudio server. For example if you use “mpd” or some other daemon audio player which runs as a different user than you he will own the server – which can get inconvenient.

The next step is configure pulseaudio itself. In

i had to add

to set the default values. After that alls thats left is deciding whether you want autospawning – which you do in

then start a pulseaudio server, watch the debug output and connect with pavucontrol. Pavucontrol lets you reroute stream to output devices (so you can switch your mplayer live from spdif to analog out to some network device and vice versa) as well as set per-application volumes or set your default output.

All thats left is – if you want networking – on the server to (either in default.pa or dynamicall) load the networking module using:

where 192.168.0.42 may be your trusted other party or a whole trusted network in the “<ip>/<decimal netmask>” notation., then on the client you can either use a whole remote server via

then start any pulse-aware audio application and it will connect to the remote server, or – more elegant in my view – you can add your remote server as a (tunneled) sink:

then you’ll have your network output device listed as any other output device in pavucontrol and you can reroute streams (live! although with a short initial lag/stutter period)

This is what my pulseaudio setup looks like – and i’m *really* happy with it. Everything works as expected, including mplayer on 5.1 movies working out of the box! If you have any questions, feel free to ask!

I’ve recently had the problem that my Debian Testing box wouldn’t show “Digital Surround (+X)” in PaVuControl, hence i could only output stereo over my S/Pdif line. This obviously sucks, so i’ve started digging. The item shown here would be missing:

So, what could cause this? I have (had) Debian-Multimedia in my sources.list, and some libav* packages were installed from there. Turns out libasound2-plugins which provides the a52 stuff requires some libav’s for the actual processing, and the DMO versions are incompatible! So the obvious solution is to downgrade them:

After these downgrades (or from whereever you are…), and a restart of pulseaudio, the surround configuration appeared again, as you can see in the above screenshot!

2 thoughts on “PulseAudio for analog/spdif hell – so simple, yet you have to know…”