“A towel is about the most massively useful thing an interstellar hitchhiker can have.”

The Hitchhikers Guide to the Galaxy writes

Partly it has great practical value – you can wrap it around you for warmth as you bound across the cold moons of Jaglan Beta;  use it to sail a mini raft down the slow heavy river Moth; wet it for use in hand-to- hand-combat;

Or so it goes on…

More importantly, a towel has immense psychological value. For some reason, if a strag (strag: non-hitch hiker) discovers that a hitch hiker has his towel with him, he will automatically assume that he is also in possession of a toothbrush, face flannel, soap, tin of biscuits, flask, compass, map, ball of string, gnat spray, wet weather gear, space suit etc., etc. Furthermore, the strag will then happily lend the hitch hiker any of these or a dozen other items that the hitch hiker might accidentally have “lost”. What the strag will think is that any man who can hitch the length and breadth of the galaxy, rough it, slum it, struggle against terrible odds, win through, and still knows where his towel is is clearly a man to be reckoned with. 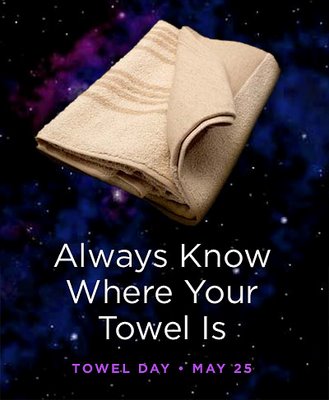 Now what am i trying to tell you by this? HELL, theres something that really ROCKS! You know what it is? Right, TOWELS!

And for that one and very reason we made one. A very epic one.

By the way – whoever is able to decode what’s on there may win … uuuhm .. as many washing-machines as that person can catch!

So, bottomline of this post: Spraying cloth with a nice stencil isn’t that hard. Actually if you see plain white t-shirts selling on Ebay for 2 Euros you come to think of those text-only-nerd-tshirts … and that it’s quite simple and cheap to make them yourself for only a few bucks. If you’re good with the airbrush — or the cutter, in case of complex stencils — you can do even more custom, more nerdy stuff.

You’ll see first samples of that soon — i hope.

Ookay, i think this was it for this “tutorial”, i hope you enjoyed the idea, and i hope your friends will get decent towels soon too, cause, you know, what’s more important in live than having your towel always with you? J/K