So we’ve been busy sewing a few of them. Unfortunately we haven’t quite gotten to the idea of blogging and being all Web 2.0 at the first plushies, so no pictures of them.

Okay so what do we have here?

Which is a part of the idea of sewing every (at least more or less sewable) Nintendo Character :P.

And what do we have here? 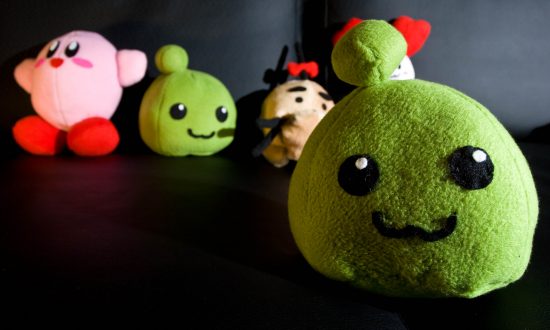 A Poporing! The green version of the loved-by-everybody-pinku-jellyfish-blob of Ragnarok, the Poring (of which our first two Plushie-sewing-tries are already given away). A nice Tutorial on how to sew *Rings and Drops is also being worked on, so stay tuned if you want your own *Ring/Drops.

And last but not least: Boing! ZOMG!

Mr Saturn! Everybody who played Earthbound gotta LOVE Mr Saturn! (Super Smash Bros. * too, you can throw him around, after all!). We used this Tutorial as a base for our Saturn, we just made him a bit less cutaneous for the user to achieve a better cuddle-result. Also we’ve noted a little problem in the original Tutorial as you can see – the Nose. Its kind of to blobby, a bit too large and not long enough. Also stay tuned for a fixed pattern for the Saturnose.

But anyways, all of them have been quite fun to make – also there will be a great deal of Tuts on Sewing those plushies as we make them.

1 thought on “Plushies, tons of”